How’d this happen? Our plan was to show bulges which were a little less blatant. But really, it’d be a shame not to kick off our glorious expedition without a shot of Manchester United soccer play Cristiano Ronaldo showing us his goods. These pics are doing the rounds, and we didn’t want to be left behind like the fat kid at gym practice.

A Socialite’s Life had a mag scan back in June 05 which showed Ronaldo seemingly packing it in his pants, and they thought it was “sufficiently stuffed”. But now Ronaldo has upped the ante, and the site has more pictures (in addition to the one left) of Ronaldo bulging on the boat. Is this an attempt to convince us he’s all real? Will the folks at A Socialite’s Life be won round? Or will Ronaldo be “caught unawares” for some more bulging pics in the future? Time will tell.

If you’re worried we’re treating him too much like a piece of meat, don’t worry. There is more to him than his nice body and underwear activity. One person posting at A Socialite’s Life jumped to his defence. Well, with one small caveat. “Not only is he cute, well could use some dental work, but he’s a great player.” 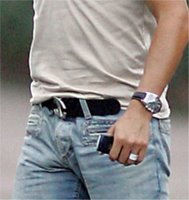 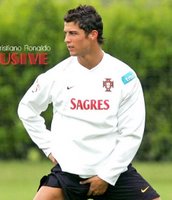