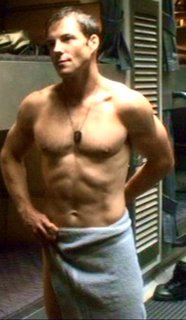 Jamie Bamber knows how to get attention. He really does.

Bamber stars as Lee Adama aka Apollo on Battlestar Galactica, and played his trump card on Sci-Fi this last Friday (or at least those lovely writers made him do it) and has probably left a lot of hard men and wet women in his wake.

You gotta admire this guy. Rob over at Bent Blog certainly does. “Un. Fucking. Believable,” he salivated, and who could disagree? Bamber has to be about 80% muscle, yet he doesn’t look like he’s been popping steroids for breakfast.

Of course, to bring this into our site’s remit we have to talk about a particular muscle of Bamber’s. Not a lot is revealed from the episode admittedly. We get plenty of skin of course, and Bamber gets just so close to showing us it all that it physically hurts. But we did get a couple of shots of some bulge activity beneath the towel.

But for the full range of non-bulgecentric pictures, we suggest checking out Bent Blog or dreamcaps.org where the pictures originated. And Bent Blog slapped him again last year.

Not that there’s any correlation, but if the thickness of his arms is anything to go by then what’s under the towel could be quite eye watering.

8 thoughts on “Show us the arrow of Apollo, Jamie Bamber!”